Announced by Rockstar earlier today, the new role will add to the three which have existed since the roles system was launched earlier this year. Taking on the role of Moonshiner will allow players to “establish your own bootlegging business”, which Rockstar describes as “an ideal fit for players progressing along the Trader path or anyone seeking a property to call their own”. Progression along the path of a Moonshiner will see players “unlock unique role-specific skills as you perfect your distillation methods, avoid the law, and put rival peddlers out of business”.

To become a Moonshiner you’ll first have to be a Trader. Any Traders who have completed a sell mission or reached Rank 5 will get an opportunity to meet Maggie Fike, an “experienced bootlegger with the scars to prove it” who resides at Emerald Ranch. Once here, you’ll need to buy a Moonshining Shack to get started, which may look like a normal homestead but is actually far from it. According to Rockstar, “to passers-by, the Shack is an unassuming dwelling, the main floor acting as a front with all the details of an ordinary homestead. The basement, however, is where you’ll ultimately get down to business.”

Operating your Moonshine business is just part of the role though. Taking on the role of Moonshiner will also grant you access to a series of story missions related to Maggie Fike, all of which can be played either solo or cooperatively. These story missions will see you “help her get revenge on those who tried to take her down” and eliminate a rival operation, and you’ll learn new recipes and techniques for creating top-tier Moonshine along the way. You’ll also be able to open your own underground bar which can be fully customized with a number of cosmetic décor items and a dance floor complete with a country band.

Outside of the new role and the new additions related to it, the update will also add Outlaw Pass No. 2, the new Navy Revolver, additional clothing options, and an increase in the amount of outfit slots in your wardrobe. For any PC players who haven’t yet checked out Red Dead Redemption 2, don’t forget that it will finally arrive on Steam this Thursday, and most of its early teething issues have now been cleared up. 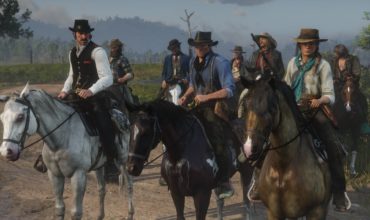