Racing games have never really been my forte, but the Forza Horizon series has always managed to spark my interest. Forza Horizon 4 is no exception to this.

When you first start Forza Horizon 4, you’re dropped straight into the action. You’ll immediately experience one of the major new additions that the game has to offer, ‘Seasons’. You’ll experience each of the four seasons—Spring, Summer, Autumn and Winter—throughout the (rather long) tutorial, and each season is as beautiful as the last.

As well as the seasons, one of the first things you’re going to notice is the graphics; this is, without a doubt, the best looking Forza Horizon game to date, which is of course to be expected, but it goes further than that, it’s the best looking racing game—and potentially even the best looking game full stop—ever made. The amount of detail that has gone into the graphics is to be applauded, from the small details on each car to the terrain and rain affects, everything looks amazing, and as you drive through Edinburgh it would be hard to tell if you’re looking at a picture or a game, it’s that impressive. This is especially apparent when playing in 4k on either the PC or the Xbox One X.

The realism doesn’t stop with the graphics though. The sounds are equally impressive, with each car sounding like their real life counterpart, and each skid, drift and crash sounding exactly how they would in real life; of course, I’m going by what I’ve heard in movies here, as I’ve never crashed my car (I’m a good driver, honest) and my car isn’t fast enough to drift around corners. Also, the sound that your car makes will also change depending on what upgrades you put on it, which is a nice touch. 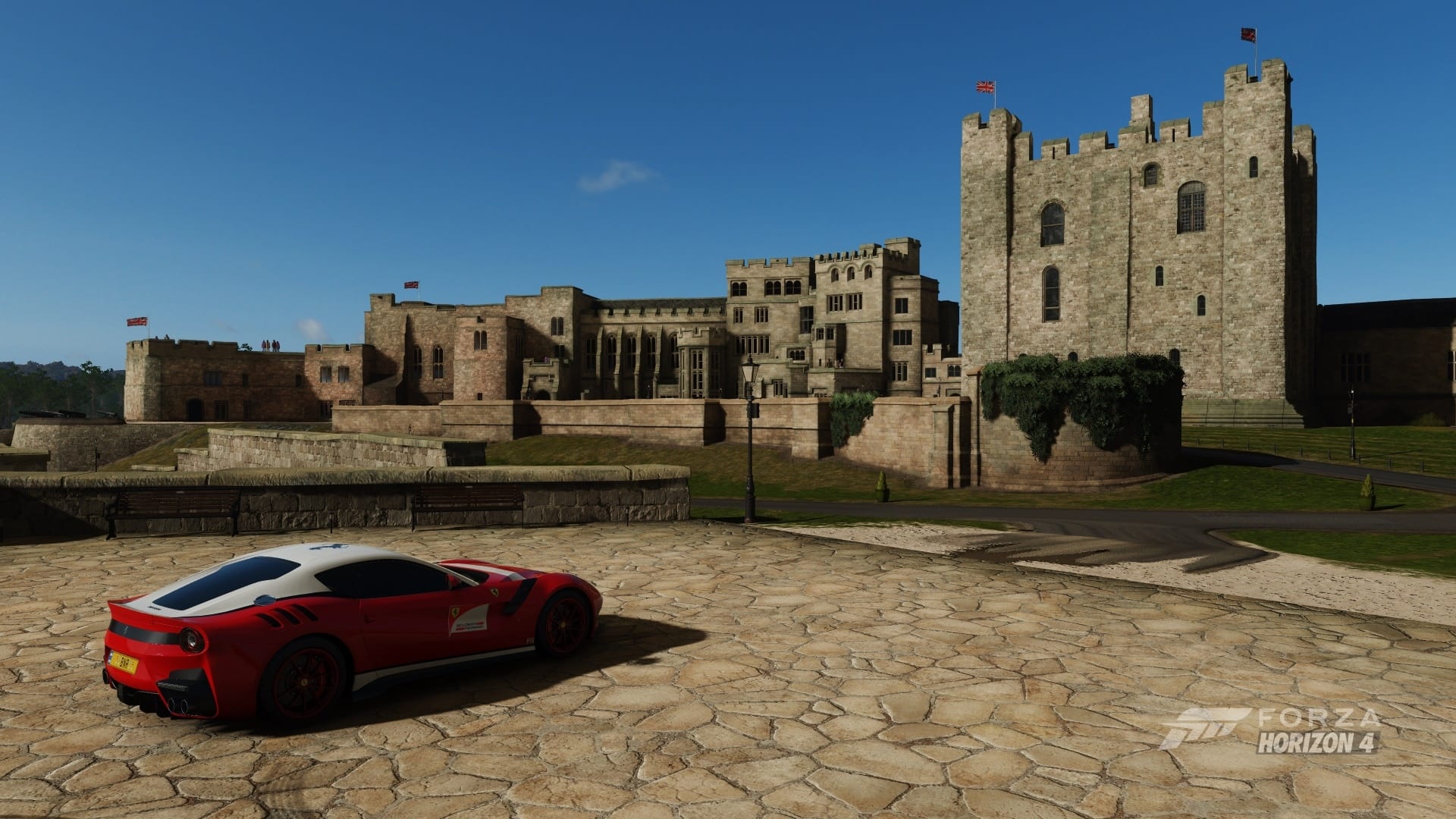 The graphics are impressive

Well, the gameplay is equally impressive. The driving is perfect, and the map is absolutely littered with different types of events for you to participate in, such as street racing, cross country, dirt racing and drag racing, as well as other mini-events such as drift racing and stunts to perform. Because of the variety in track types on offer, you need to change your car to one that best suits each event type, this in turn makes the game feel less repetitive, which is something I find is an issue for most other racing games. There’s sure to be a race type to suit almost everyone, even if you wouldn’t usually class yourself as a massive racing fan. If these events just aren’t quite big enough for you, the series famous Showcase events also return and see you racing against jets, trains, hovercrafts and more – each showcase event really shows off the sleek graphics and driving mechanics and are sure to get the adrenaline pumping.

There’s a lot to do, then. And those are just the offline race types, I haven’t even touched on the online aspects of the game yet.

Let’s touch upon it then. Multiplayer adds a whole new set of game modes in the form of ‘Playground Games’, these are essentially mini games such as Capture the Flag and Tag. They’re all pretty fun, but they do get a bit boring after a while. When you first boot up multiplayer—which is titled ‘Team Adventure’—you’ll have the choice of three playlists: the first playlist comprises of the standard racing types, such as road and dirt racing; the second playlist features only the playground games; and the third playlist features a mix of both game types. I usually opt for the mixed playlist, as it adds a bit more variety to the whole experience; the playground games all have different objectives, but they nearly all just consist of you either bumping into other players or avoiding them, so it all gets a bit tedious rather quickly if you’re playing them back to back.

As well as the multiplayer race playlists, you can also team up with other racers in the Forza Live events, which will see you all working together in order to hit an objective, such as a total drift score or total speed score. This is a pretty cool feature, and it runs on the hour every hour and gives you a bit of a rest from the usual race types; it also rewards you with Forzathon points which can be spent in the shop. 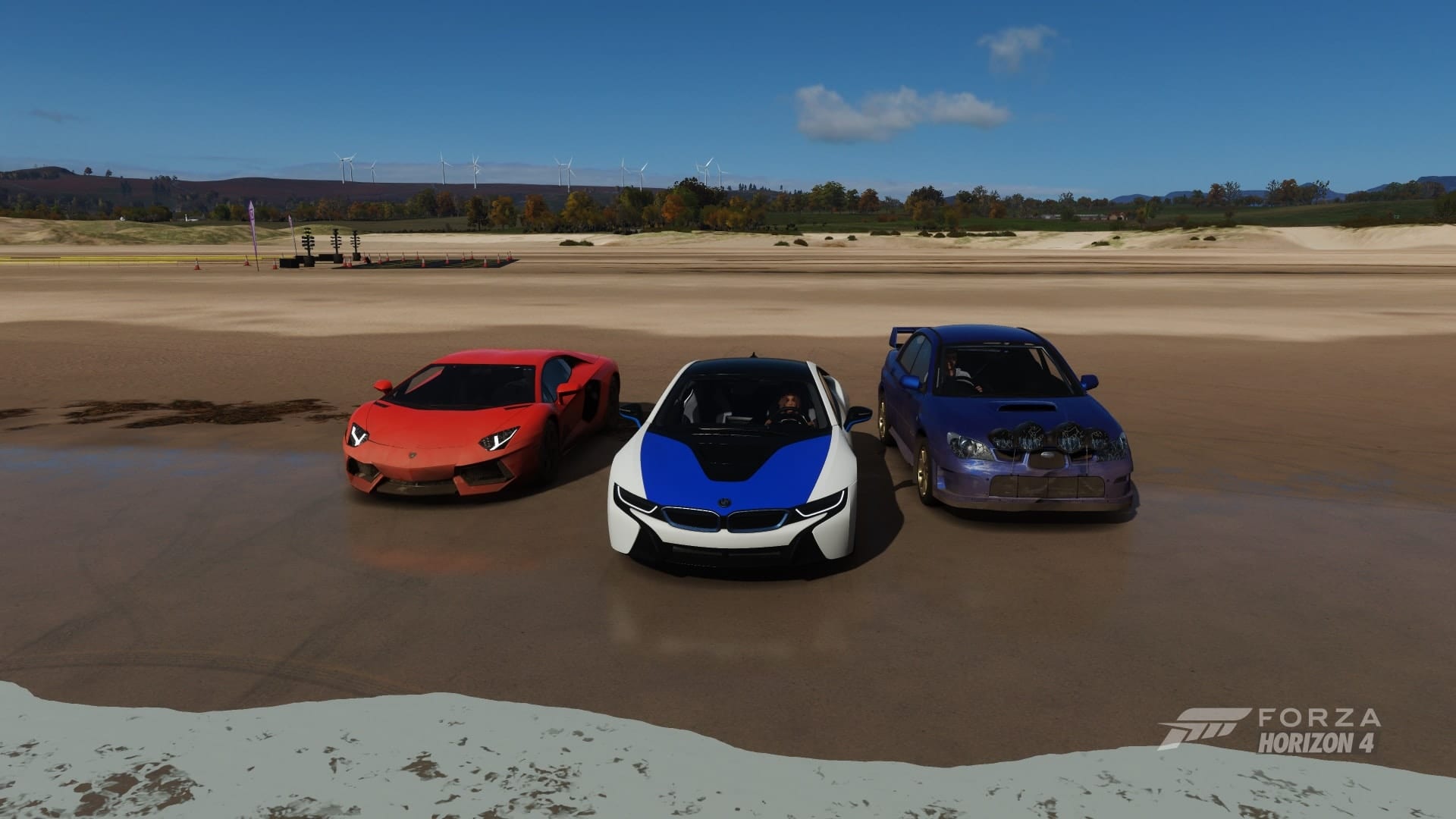 Race around Edinburgh with friends

That’s about it on the multiplayer front. Of course, you can still challenge other racers to a 1v1 race, but so far (after about 80 requests) I still haven’t had anyone take me up on the challenge, so I think this feature is only here if you want to have a race against a friend. I wish I had a friend so I could try this out. Feel bad for me.

If all of these different ways you can race aren’t enough to tempt you, the game—much to the joy of car enthusiasts—features hundreds of different customisation options for your cars. Speaking of cars (well, it is a bloody racing game), there are over 450 different cars for you to use, and you can upgrade everything on them, from the engine to the tyres and exhaust systems. You can also tune your car, which, to be honest, is a bit too complicated for me and when I tried it I made my car drive considerably worse. Luckily though, you are able to apply other users tuning options to your car, which is pretty neat. The tuning and customisations options are so in depth that you could, if you wanted to, convert a Ferrari F12 into a drift car.

And when you get bored of tuning your cars and racing them, you can head out to explore the map, looking for treasure in the form of ‘Barns’. Returning Forza Horizon players will be very familiar with these barn finds, but if you’re new, let me tell you about them. When you find one of the many barns which are hidden around the map, you will be given a car as a reward. These are usually classic cars, such as the Triumph Spitfire or the Lotus Elise GT1, both of which were great cars in their own right, and with some upgrades and tuning you can make them great once again. 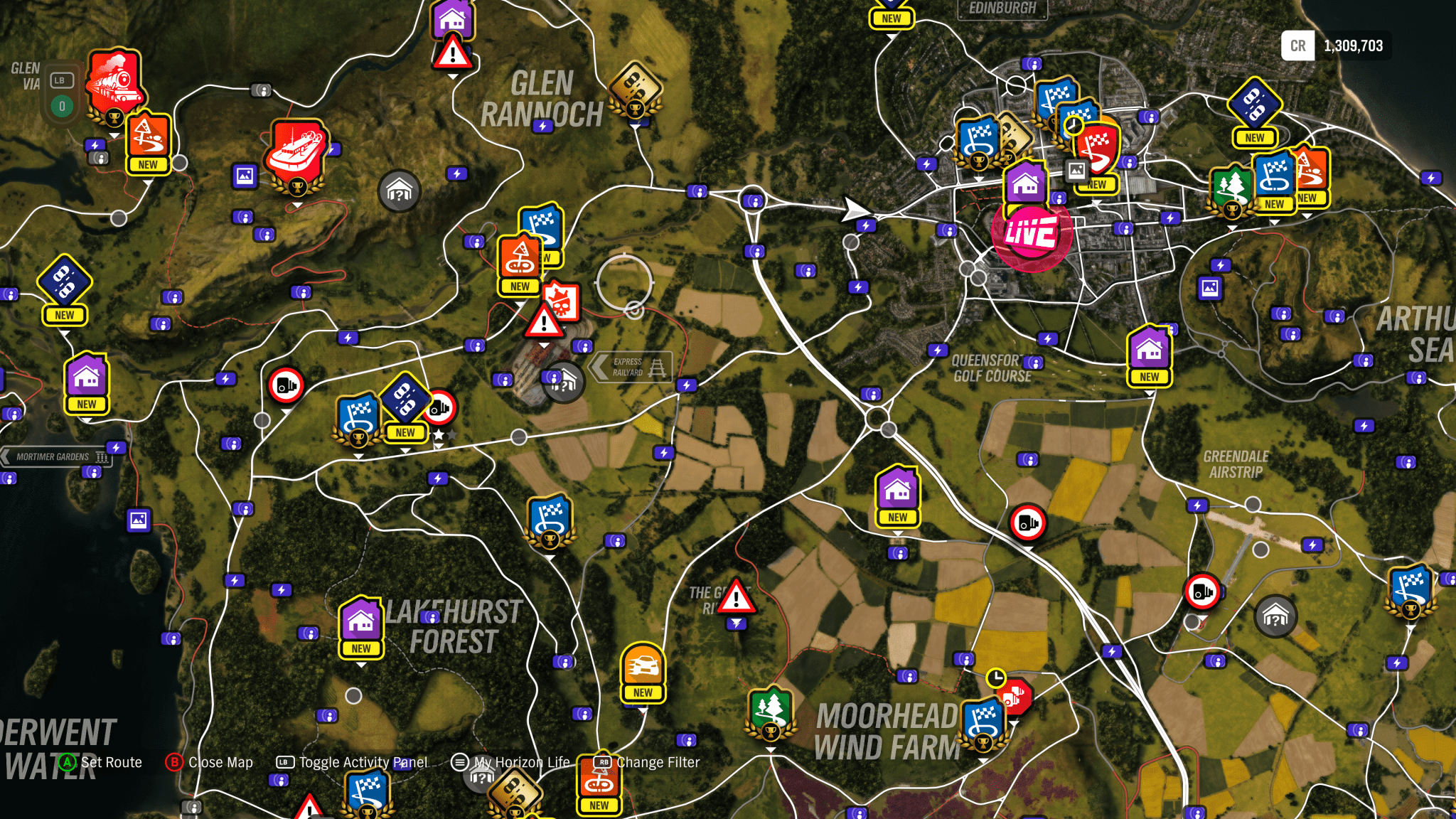 There’s so much to do in Forza Horizon 4

So, after all that praise, you’re thinking “this game is getting a 10/10”, right? Not quite, there are a few issues with the game, let me explain:

I started this review praising the graphics, so it makes sense to begin the negatives with the same thing; occasionally, the game suffers with pop-ins. For example, when you leave the garage after applying a hot new paint job, you will sometimes see the old design on your car before your new design pops on. Also, if you have a custom rim colour, you will occasionally see the stock colour appear on the rims when you wheel spin. These are by no means game-breaking bugs, they’re just a bit annoying to see in a game that otherwise looks so beautiful.

This is extremely annoying, because you have to wait for a new game to load before you can quit

The second negative has to do with the online game mode, ‘Team Adventure’. Don’t get me wrong, it’s a great game mode, and it’s actually where I spent the majority of my time, but it has one very annoying issue. When you start a playlist, you will have to play 5 races to complete each round, which is fine and it works well, but the game will automatically put you into the queue for the next set of 5 races as soon as the first playlist has finished; you cannot leave Team Adventure mid-set. This is extremely annoying, because you have to wait for a new game to load before you can quit, this also means that you quite often start a set of races with less players. I’ve even started a set where there was just me on one team, all on my lonesome against a full team of opponents.

Speaking of having to wait for the next game to load, this is an issue across the whole game. The game takes a very long time to load into any event, I’ve waited up to 8 minutes before. Honestly, I could have joined an event, gone to make a brew, grabbed a biscuit or two and got back with time to spare. This is mainly apparent on the online game modes; offline seems to be okay, at least on the Xbox One X.

The final negative for this game revolves around microtransactions. In the lead up to the release date, we were told that you can no longer buy tokens with real money, which I took to mean that they were removing microtransactions from the game completely. However, there’s still plenty of microtransactions to be had. For example, there are plenty of car packs to buy, there’s Forza Horizon VIP, there’s a treasure map for the barn finds and there’s a car pass.

None of these microtransactions are needed to progress

Now, it’s important to note that none of these microtransactions are needed to progress, and they don’t give you an edge over your opponents (when you start a race you all have to use the same class of car) and honestly they are better than random loot boxes. There are a few areas in the game where it makes you think that you need to buy them, though. For example, on one of the stunt races, I was asked to drive a classic car. When I requested to see a car to use, it took me to the James Bond Car Pack, which cost something like £5; I thought this was quite deceiving, especially as you can’t buy the James Bond cars using in game currency, though I believe it is possible to earn the James Bond cars in the game via ‘Reward Wheelspins’.

But regardless of the negatives above, most of which will hopefully get patched out in upcoming updates, the game is still great. No, it’s better than great, it’s amazing, and to make it even better it’s available on the Game Pass. It’s well worth the £7.99 subscription cost, even if you only play it for a couple of months. I would actually recommend that most people play the game via Game Pass unless you’re a die-hard racing fan; if you’re more of a casual racing gamer like me, you’ll most likely only play it for a month or so before moving on, and you can’t grumble at £8 for a months worth of entertainment.

Forza Horizon 4 is the most fun, most feature-heavy and most beautiful racing game I have played to date, and is an absolute must-have for car enthusiasts and casuals alike.

Update: Since posting this review Playground Games have given users the ability to leave multiplayer playlists between rounds – this wasn’t a feature at launch hence the negative comment about it above.

If you’re a fan of Forza Horizon games then you’re in for a treat, because this is by far the best iteration in the series to date. With over 450 cars and plenty of variety in race types, it’s easily the best racing game currently available.
9