I wouldn’t say that I’m a fan of golf games, or golf in general for that matter. So when I picked up Golf Story in the Nintendo store, I was pleasantly surprised at how enjoyable a golf game can actually be.

Allow me to start at the first Tee; Golf story is a golf-themed, 16-bit styled RPG developed by Sidebar games, exclusively for the Nintendo Switch. You play as a young golfer, returning to the game after a long absence, with your heart set on joining the pro tour and becoming a professional golfer. Sounds like serious stuff? It isn’t. In fact, that’s pretty much as serious as this charming RPG takes itself.

On your journey to competing in the pro tour, you will be challenged with many golf-related activities and various RPG based fetch-quests. The former ranging from bouncing a ball off a walkway and onto the green, to hitting golf ball sized turtle eggs back to their mothers. It’s pretty crazy stuff and at times these quests can feel repetitive and not very challenging. Luckily the introduction of new clubs, items, gameplay mechanics and the fact they can be completed in no more than a few minutes each—with no failure penalty—stop you losing complete interest in these activities. The same can’t be said for some of the RPG’s side of the game sadly. Fetch-quests will have you charging around a golf course looking for items to deliver and talking to NPC’s to start item trading. These quests are the worst golf story has to offer, and they start to feel a little like gameplay padding after a short time. The bulk of the RPG quests, however, are oddly enjoyable; from mowing the fairway to hitting zombies on the head with a 4-iron. These activities, whilst not usually straying far from the golf theme, remain charming and witty throughout.

Charming and witty throughout

A basic levelling system ticks over as you complete tasks and matches. Once levelled up, you can assign points to 4 categories. For example, the Power category will improve the distance you can strike the ball off the tee. It’s all simple stuff and to be honest I rarely noticed any difference out on the course.

For a golf game, strangely not a lot of competitive golf is played

As well as levelling, items and new equipment can be purchased, found and rewarded through activities. Clubs work much the same way as levelling your character; distance and accuracy can be improved for example, often with a small penalty to other attributes. Items, however, have a lot more noticeable effect on gameplay; my dad’s old golf glove grants me a power shot ability which refreshes the more accurate I am in swinging my clubs, this was just one of the items that really helped in some of the more challenging quests.

For a golf game, strangely not a lot of competitive golf is played; by the time I’d reached the 16-hour or so end, I’d played roughly 12 competitive matches. It’s a shame really, I’d have loved to see that number doubled and the difficulty cranked up towards the end, because the game really does shine out on the course. Gameplay wise, this is a tight, mechanically sound and exciting golf experience. Never once did I feel like I wasn’t in complete control of my golf ball, or that any bunker or water trap I hit wasn’t my fault. 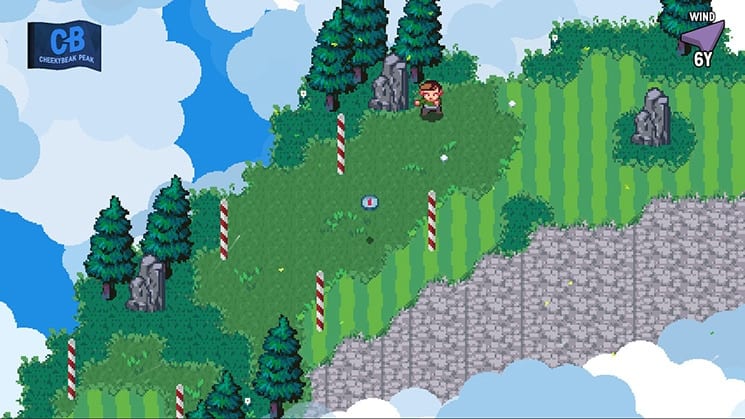 It’s this brilliant gameplay that really propels Golf Story to the top of the Switch indie hit-list. From genuinely laughing out loud at some of its many zany characters one-liners, to being in deep concentration when needing a birdie to win on the last hole of a tournament; Golf story continues to be some of the most fun I’ve had on the Switch Indie store and like many other titles currently gracing the Switch, yet another reason to own Nintendo’s latest hardware.

A charming, witty and highly enjoyable golfing RPG; repetitive challenges aren’t enough to stop this from being high on the ever-increasing priority list of Nintendo Switch indie games. If you’re a fan of sport in general or the throw-back RPG genre, you can do a lot worse than golf story.

A charming, witty and highly enjoyable golfing RPG; repetitive challenges aren’t enough to stop this from being high on the ever-increasing priority list of Nintendo Switch indie games.
7