Fortnite’s latest patch is now live, bringing with it changes to cross-play matchmaking, free vending machines, and the new vehicle The Baller which was announced yesterday.

Starting with The Baller, we now know that it will be found at Expedition Outposts and around pirate camp loot stashes. It has an attached Grappler and Boost functionality that will allow players to “pull yourself up cliffs or swing through the tress”, so it should give you some pretty versatile maneuverability. The driver will be protected from damage while in The Baller, but the vehicle itself will be vulnerable to enemy weapon fire, although it does have 300 Health so it should provide quite a lot of protection.

Vending Machines, meanwhile, will now provide items completely free of charge, but they will only dispense one item before they self-destruct, much like you were Ethan Hunt and the vending machine had just given you a seemingly impossible mission.

Quite notably, Epic are also making some pretty big changes to how cross-play matchmaking works, with Xbox One and PS4 players now in the same pool and Nintendo Switch and Mobile players in a different pool. Previously, Switch players were in with Xbox One and PS4 players, but this change that puts Switch players in with Mobile players should both make things a bit more fair for Switch players that are playing on the move and provide Mobile players a larger player pool to matchmake with. Epic says that the motivating factor behind these changes is “unlocking optimization potential allowing us to run more playlists during more hours of the day while supporting more data center locations.” I think that basically means that they think it’ll be better.

Elsewhere in the update, the common rarity version of the Infantry Rifle has been removed, and the Heavy Assault Rifle is getting nerfed into the ground, with the Rare/Epic/Legendary rarity variants swapped out for Common/Uncommon/Rare, lowering the base damage scaling amounts to 36/38/40 respectively. Clingers are also having their max stack size reduced from 10 to 6 too, but I’m sure we can all agree that less clingers is always a good thing, right?

There are also a number of bug fixes and quality-of-life changes, and you can read all about them here.

Fortnite is getting a Valentines Day-themed “Share the Love” event 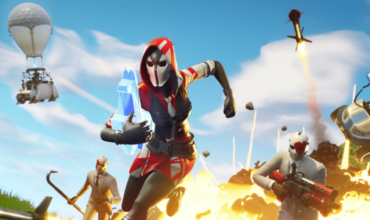