Gar! Listen up ye filthy landlubbers! Sea of Thieves is celebrating its first birthday today, and now that they’ve finished blowing out their candles Rare has offered some new details and a new trailer for the games upcoming massive free Anniversary Update, which is all in aid of celebrating the games milestone. Check out the trailer below:

The Anniversary Update promises to bring big changes to the world of Sea of Thieves, which has continued to grow and develop following the games somewhat lacklustre launch at this time last year. The upcoming update will add a number of new features that will bring you “more ways to embrace the pirate life than ever before”, including two major additions known as The Arena and Tall Tales – Shores of Gold.

The Arena is the previously announced competitive PvP mode for the game, allowing players to “pit your ship and your crew against others in a distinct game mode which will continue to grow in parallel to the Sea of Thieves adventure experience”. The Arena’s official announce trailer (which you can watch below) that dropped all the way back in November 2018 indicated that The Arena would see crews battling it out to see who could collect the most treasure.

The next major addition, Tall Tales, is a much more story-driven affair. Tall Tales will be a series of “narrative adventures” that will be introduced to the game, allowing players to delve “deeper into the lore of our favourite pirate paradise”. Shores of Gold will be the first part of Tall Tales, and Rare promises that “fans of the expanded game universe will recognise some of the iconic character and locations” that feature, and players can also expect to encounter all-new enemies and traps. Strong, story-focused content is something that’s been sorely missing from Sea of Thieves, so hopefully Tall Tales will fill a void that’s been gaping since the game launched a year ago.

Fishing also seems to be quite prevalent throughout the duration of the trailer, which is surely included to steer players towards The Hunter’s Call, a completely new Trading Company that “brings long-awaited fishing and cooking capabilities to the Sea of Thieves”. The Hunter’s Call is run by the returning Merrick, and players will be able to trade in their best prizes and food for gold and cosmetic rewards, as well as another path to Pirate Legend.

Finally, the Anniversary Update will also add “various world improvements” to the game, including expanded ship damage—that will allow your mast, capstan, or wheel to be destroyed, which could be a real pain in the arse—and the addition of the harpoon, which will allow players to steal treasure from enemy ships, providing they have a good enough aim.

Sea of Thieves’ Anniversary Update will launch free to all players on Tuesday 30th April.

Sea of Thieves update adds Fort of the Damned 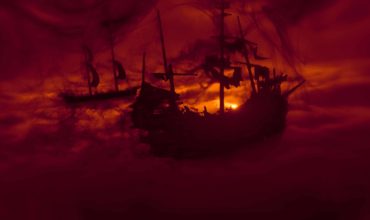