Earlier this week, Blizzard announced that it would be changing three Hearthstone cards as part of a balance patch. That patch is now live, so let’s have a closer look at the cards in question: 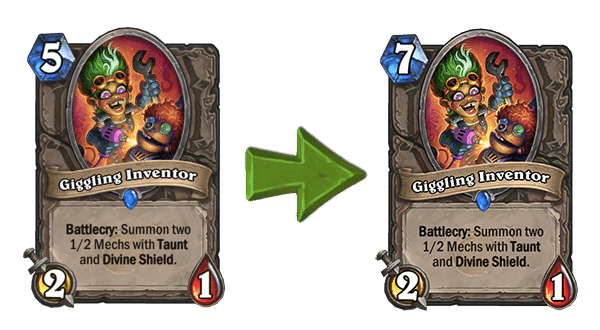 When this change was initially revealed, many Hearthstone pros predicted that this change would see Giggling Inventor demoted from being super powerful to completely busted. It turns out that these pros were absolutely spot-on, and Blizzard has agreed. The nerf sees Giggling Inventor’s cost increase from 5 mana to 7 mana, and has now almost certainly condemned the card to collection fodder or dust.

The strength of Giggling Inventor laid in its ability to offer decks a cost effective defensive option. Requiring 4 attacks to remove the taunts alone, control decks were given the time needed to slow down aggressive, aggro-oriented decks and catch-up on board. More aggressive decks like Odd Rogue also found use for Giggling; by protecting your own minions and your Hero’s health total, aggressive decks could take far more risk when pushing face damage.

The most overpowered use for Giggling Inventor, however, was when combined with Quest Rogue. It turns out that summoning three 4/4 minions—two of which have taunt and divine shield—is pretty decent, who would have guessed?

It wasn’t all bad news when Giggling Inventor took over the meta though; rarely used cards like Mossy Horror and Blood Knight had their chance to shine. In my opinion, Hearthstone is at its best when strong cards can be played and countered by everyone; all of these cards being neutrals meant that this was exactly the case. Blizzard called Giggling Inventor “one of the most powerful and popular cards we’ve ever created.” It is for this reason that the nerf is completely justified. 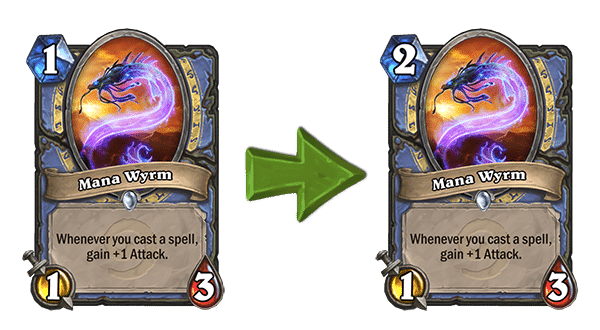 The most powerful 1 mana drop in the current format, and arguably the best 1 mana drop in Hearthstones history. It came as no real surprise when Blizzard decided to nerf this card. With its cost now doubled up from 1 mana to 2, Mana Wyrm will no longer feel like an early game decider.

The power of Mana Wyrm was in the Mage’s ability to cast low-costing and sometimes zero-cost spells. These spells would not only buff the Mana Wyrm’s attack, but it would also clear the enemies board of minions, meaning that the Mana Wyrm was free to smash face. On multiple occasions, I’ve had an opponent concede a game on turn two, when they realise they have no answer to the ever-growing Wyrm.

Now costed at 2 mana, I expect to see less aggro-Mage on ladder in the coming months. Time will tell whether or not the card will still see play in the deck, or if the deck will lose power and popularity completely. Personally, I’ll be happy to see the back of the Mana Wyrm. Any card that can decide a game on turn one is frustrating and bad for Hearthstone in general. 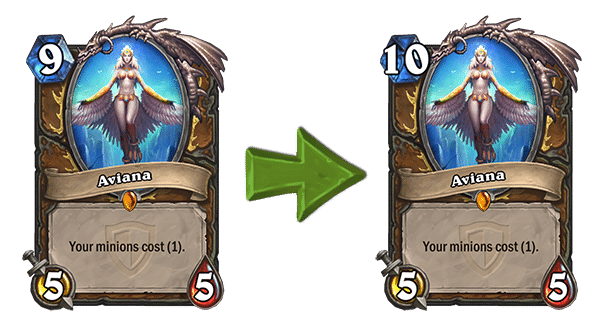 This is a Wild-format specific nerf, as Aviana is no longer playable in Standard. Changing Aviana to 10 mana means that it will no longer be possible to play Aviana and Kun the Forgotten King on the same turn without some additional help from cards like Innervate or The Coin. Currently in Wild, one of the mode’s strongest combos can be easily drawn using a card called Juicy Psychmelon. Blizzard was keen to point out that, although the Aviana and Kun combo will now be less consistent, it will still be possible to pull off this combo if you’re a player that enjoys playing this version of druid in Wild.

I’m almost certain that this deck will no longer see play in high-level Wild ladder. Losing the draw mechanic of both cards needed for combo, and adding additional requirements—like innervate or a 50% chance of having a coin—means that this version of Druid will now be far too slow and inconsistent for competitive play.

Happy with the nerfs? Or would you have liked to have seen Blizzard drop the hammer on the Druid class? Lets us know in the comments section below.