BioWare has taken to YouTube to reveal some more details about what players will experience when they get hold of Anthem on Friday 22nd February, and it finally gives us a more detailed look at what the end-game of Anthem will look like.

When players reach pilot level 30, which is the games level cap, three new difficulty modes will be unlocked. These modes, titled Grandmaster 1, Grandmaster 2, and Grandmaster 3, will offer players the opportunity to challenge themselves further and unlock better loot. As you can probably imagine, the higher the difficulty that you play on, the more chance you’ll have to get rare gear.

Thankfully, end-game will seemingly not just consist of increased difficulty (which would be bullshit), as the video also promises three new activities known as Challenges, Contracts, and Strongholds. Contracts will be “unpredictable missions” which you can pick up from NPC’s in Fort Tarsis, and completing them will award you with increased faction reputation and crafting blueprints. Legendary Contracts will also be available from time to time, tasking players with completing more difficult, multi-part missions for better rewards. Challenges, meanwhile, will be daily, weekly, and monthly, and completing them will give you crafting materials and coin, allowing you to both craft new gear and cosmetic items. Finally, Strongholds will be team-based missions that present players with some of the most difficult challenges in the game, requiring a lot of teamwork and communication to complete. Doing so will grant players with “some of the most rewarding loot that Anthem has to offer”. The video also shows a Freeplay mode, but no details were given on exactly what that will entail.

The video also promises that new characters and stories will be added to the game in the weeks and months following launch, and more gameplay features—such as guilds—will also be added. There will also be time-limited world events known as “Cataclysms”, which will be the games “most ambitious and challenging content”.

A fairly large portion of the video is also dedicated to promoting the ability to customize your character through ways of cosmetic items, saying that “your suit will soon become a reflection of yourself”. I am speculating, but I fully expect a lot of these cosmetic items to be locked behind microtransactions in some shape or form, and if that is to be the case then I’m not a big fan of it being so prominent in the video and being slated as so important. I guess we’ll have to wait and see, but we all know that EA love a microtransaction.

Of course, EA will be hoping that Anthem performs well for them following the release of their latest financial report which revealed that the company has “underperformed” in recent months.

Anthem will release worldwide on PS4, Xbox One, and PC on Friday 22nd February. 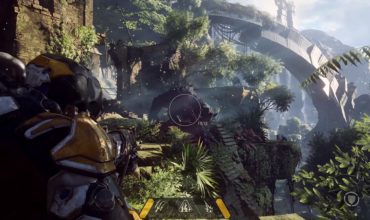