The first major story expansion for Assassin’s Creed: Odyssey will be released next week. The expansion, titled Legacy of the First Blade, will be the first of two story-driven expansions, releasing in 3 parts from December 4th.

Assassin’s Creed: Odyssey Season Pass holders will be introduced to new protagonist – Darius. It’s unknown whether he is friend or foe, with the player having to discover more about his story, motives, and how he fits into the Assassins Creed saga as the episodes progress.

As expected, with a new expansion comes new weapons and equipment, as well as new master abilities. We hope to see some different play styles that can add something fresh to the combat seen in Odyssey.

Check out the launch trailer for Legacy of the First Blade below:

Unlike conventional expansions, Legacy of the First Blade is being released in three episodes, with Shadow Heritage and the third episode, Bloodline, completing the first story expansion early 2019.

The second expansion, The Fate of Atlantis, will be released in spring 2019 and will follow the same structure of three episodes being released six weeks apart.

Legacy of the First Blade can be purchased with the Assassin’s Creed: Odyssey Season Pass, or separately from December 4th. 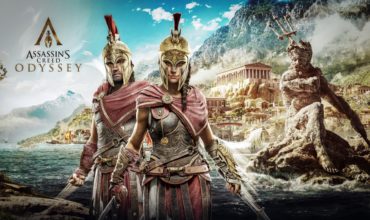