If you’re just jumping into the world of Moonlighter then you’ll probably already know that the game doesn’t really give you much in the way of a helping hand to understand its various systems. Luckily for you, we’re here to help!

The first thing you need to understand about Moonlighter is the games basic loop. You run a shop in the day and go dungeon crawling at night, then sell the items that you’ve looted from the dungeon in your shop to earn some money, then repeat the process all over again. As you do so you’ll earn more and more money, allowing you to buy upgrades for your shop and the town to make yourself more powerful (and thus better equipped for dungeon crawling) and to make your shop more profitable (and thus making yourself richer).

It’s pretty simple, but the game really doesn’t do a very good job of explaining the best way to go about this. Instead, it sort of drops you in and lets you find your own way, so we’re here with a number of beginner tips and tricks to set you on your way to becoming a shopkeeper/dungeon crawler extraordinaire. Let’s get started.

Attack from an angle

You’ll notice that most enemies can only attack in four directions, which means they can’t hit you if you’re at an angle, but the chances are that the swing of your sword will hit them. When this is the case make sure that you stand at an angle from them before attacking so you know that you’re perfectly safe while you get your hits in. 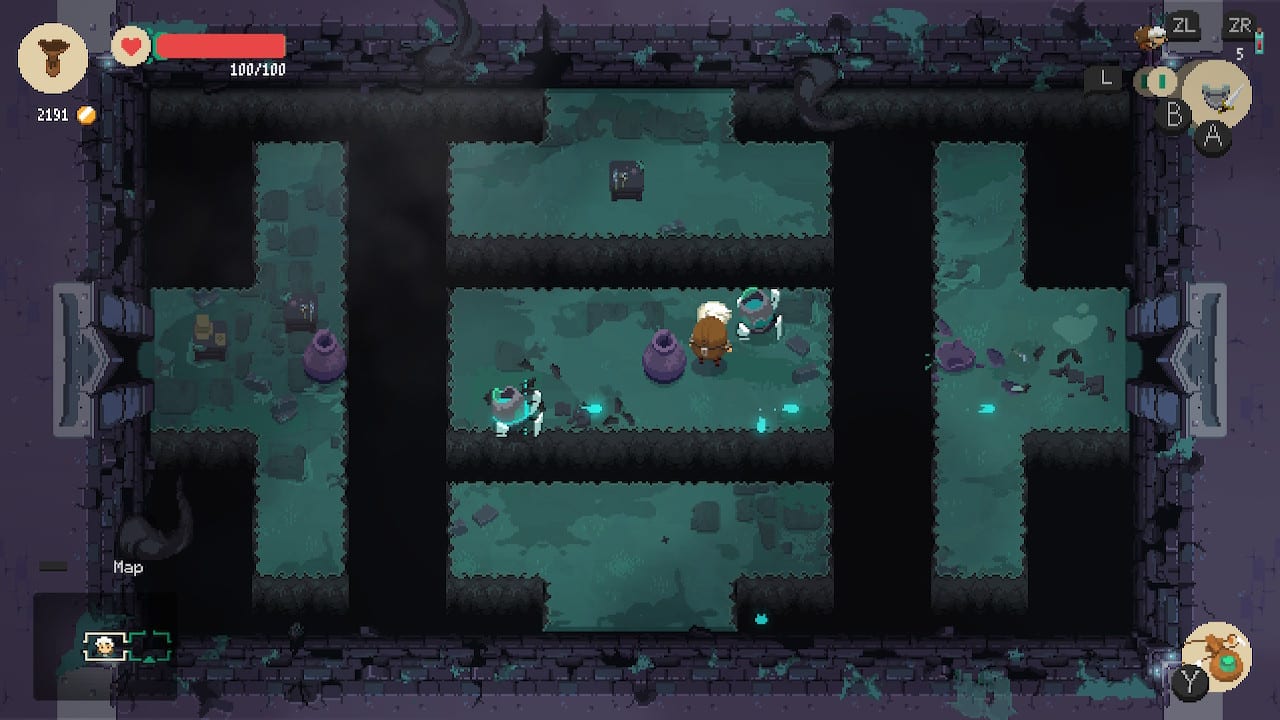 This is pretty obvious, but it’s also important. If you die while you’re in a dungeon then you’ll lose all of the items that you’ve looted in that visit, so you really do need to display some self control and know when to call it quits. If you’re struggling with enemies or running out of potions and it looks like death is likely then use your pendant and get the hell out of there. There’s no point trying to clear “one more room” if there’s a high chance that it will ultimately cost you all of your progress.

If you’re running out of space in your bag then open it up and check how your items are stacked. Sometimes the same item will take up multiple slots when you could stack them into one, so checking your bag regularly can free up more space to allow you to dungeon crawl for longer. Also watch out for cursed items which come with a caveat, such as needing to be on the top or bottom row of slots or the threat of destroying an item in the slot next to it. For example, placing some cursed items in your bag will destroy the item in the slot below; in this instance, put the item in a slot on the bottom row of your bag and all of your other items will be safe.

Look out for secret rooms below

In a lot of rooms in the dungeons you’ll see holes in the ground where you can accidentally plunge into the darkness. Doing so in most rooms will cost you some health, but you’ll notice that the darkness glistens in some rooms. When this is the case, dropping down will send you into a secret room where you can face a challenging fight against a number of enemies. Winning this fight will reward you with some tasty loot.

Upgrade your town as early as possible

Dungeon crawling gets faster and easier as you get more powerful, and the best way to get more powerful is to upgrade your town. In particular, you should get Vulcan’s Forge as soon as you can afford it, as this is your pathway to getting better armor and weapons; it goes without saying that better armor and weapons is the perfect way to make your dungeon runs easier, so doing so as early as possible will allow you to progress quicker. To upgrade your town just go to the town bulletin board in the middle of the town square. Vulcan’s Forge will cost you 500g. 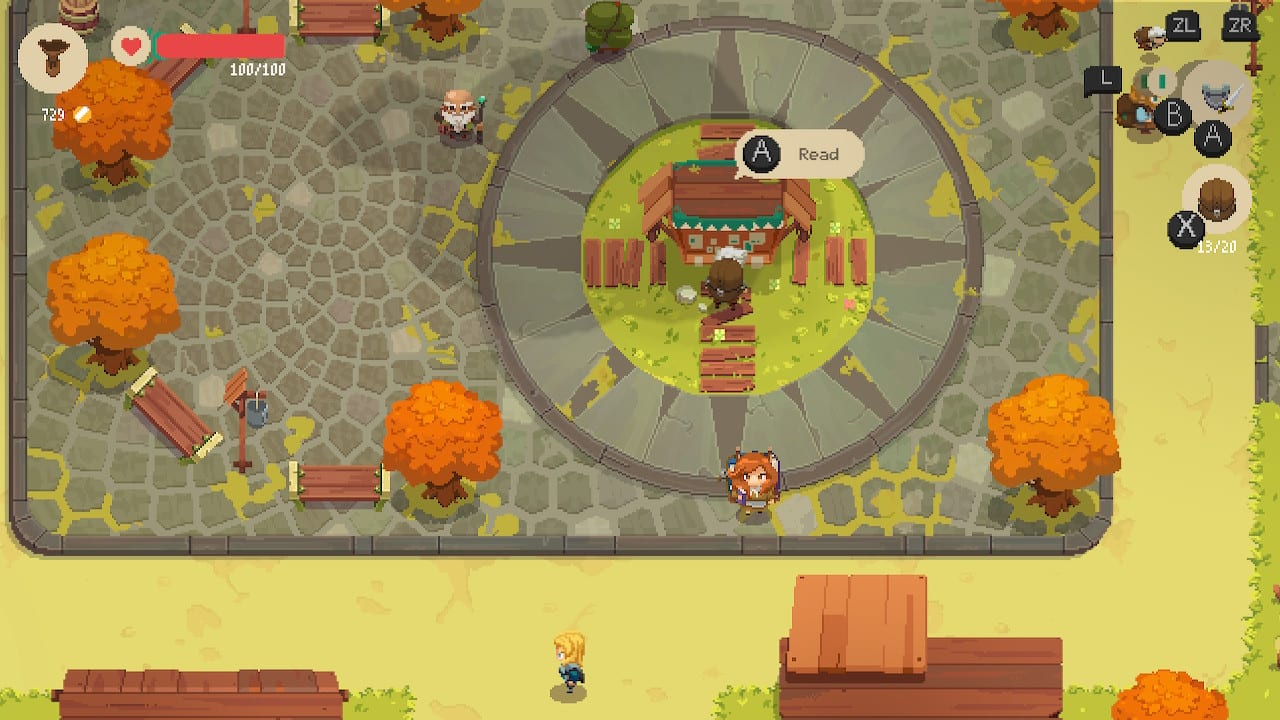 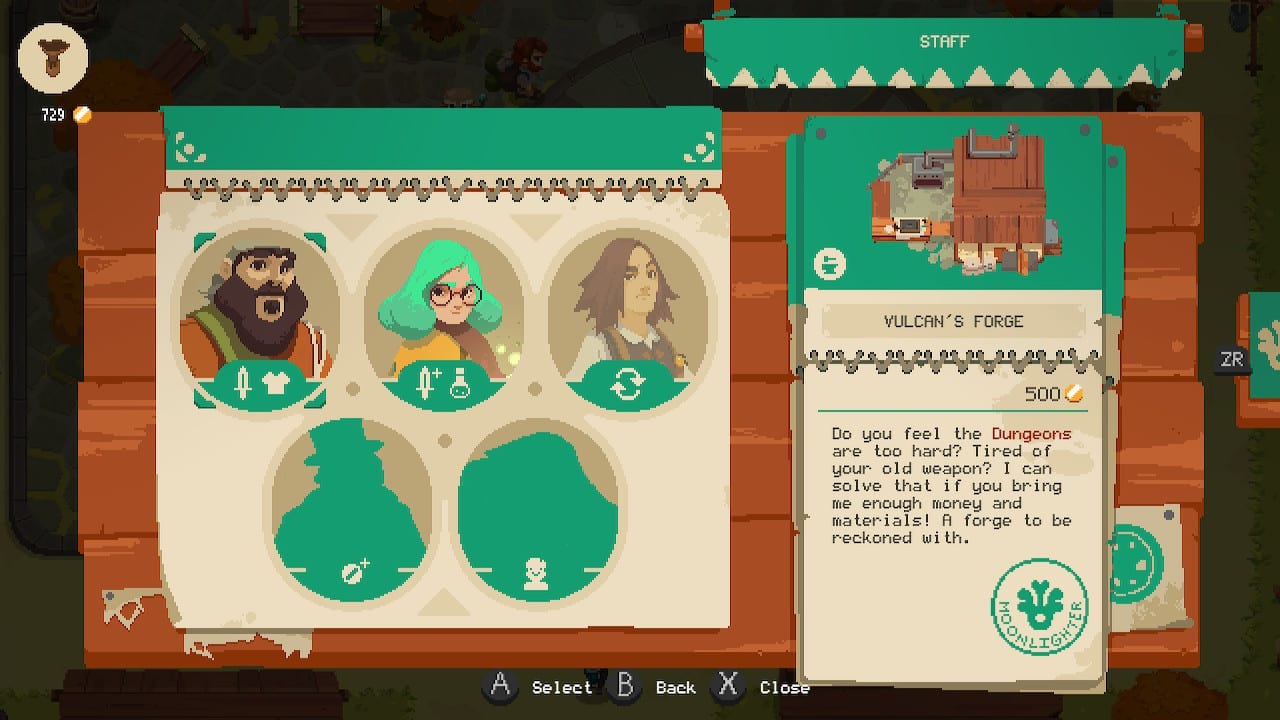 When you’re looking at getting some new gear, such as upgraded armor or a new weapon, you need to gather certain materials that are required to craft them as well as money. Adding the items to your wishlist will then mark items that are needed to craft the item with a little star, which means that you don’t have to go back and keep checking. This is vital for both inventory management and knowing what you should and shouldn’t sell, as you instantly know what you vitally need to keep and what can be sold. 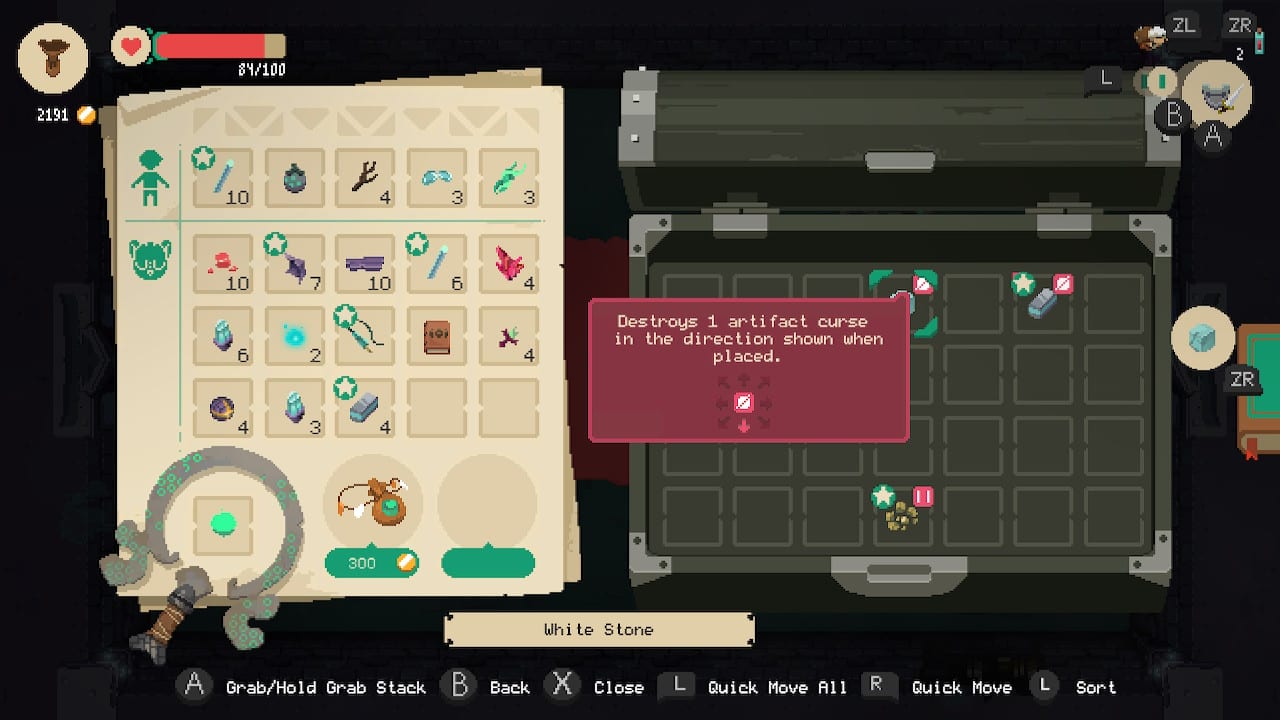 Upgrading your cash register from the town bulletin board will set you back a fair bit of money (4,000g for the first upgrade, 20,000g for the second, and 70,000g for the third), but they’ll soon make it worth your while. The first upgrade will get you an extra 10% on top of all sales (the second gets you 20% and the third 40%) which makes a big difference over the course of a full day of sales, so upgrade your cash register as soon as you can afford it and watch that money roll in. The bed upgrade is also worthwhile as it will give you extra health, but I would upgrade the cash register first. 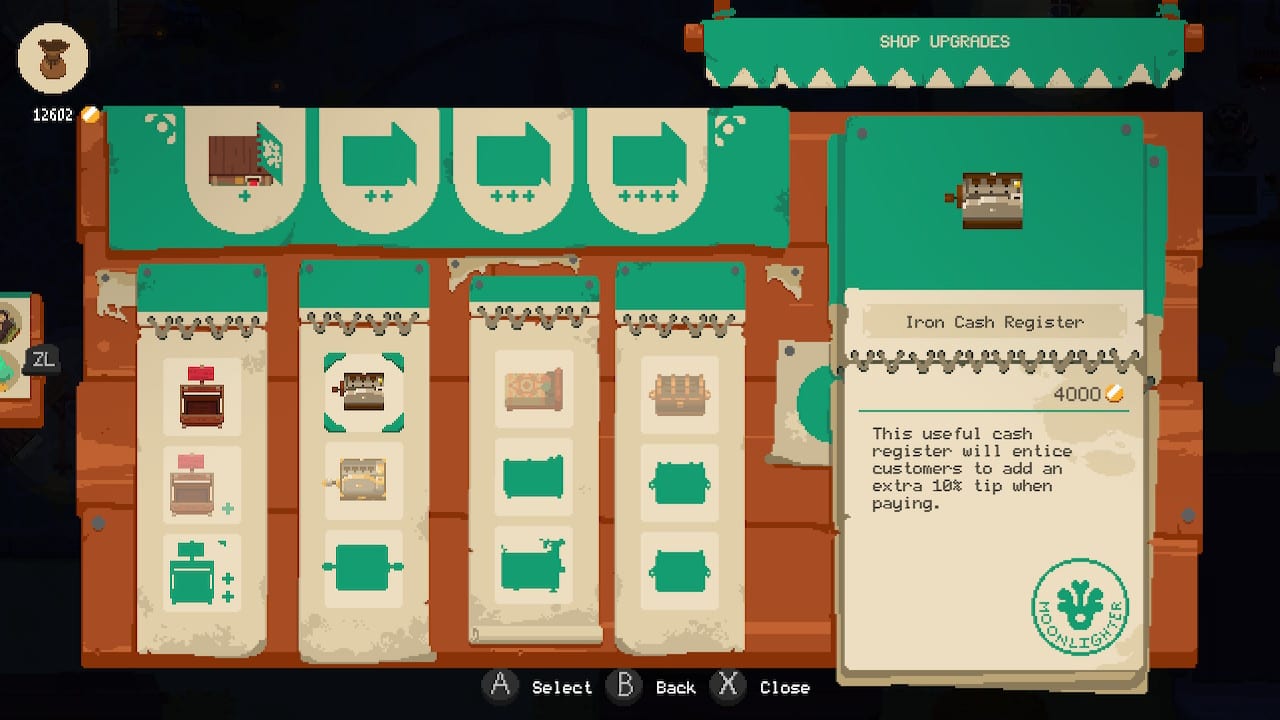 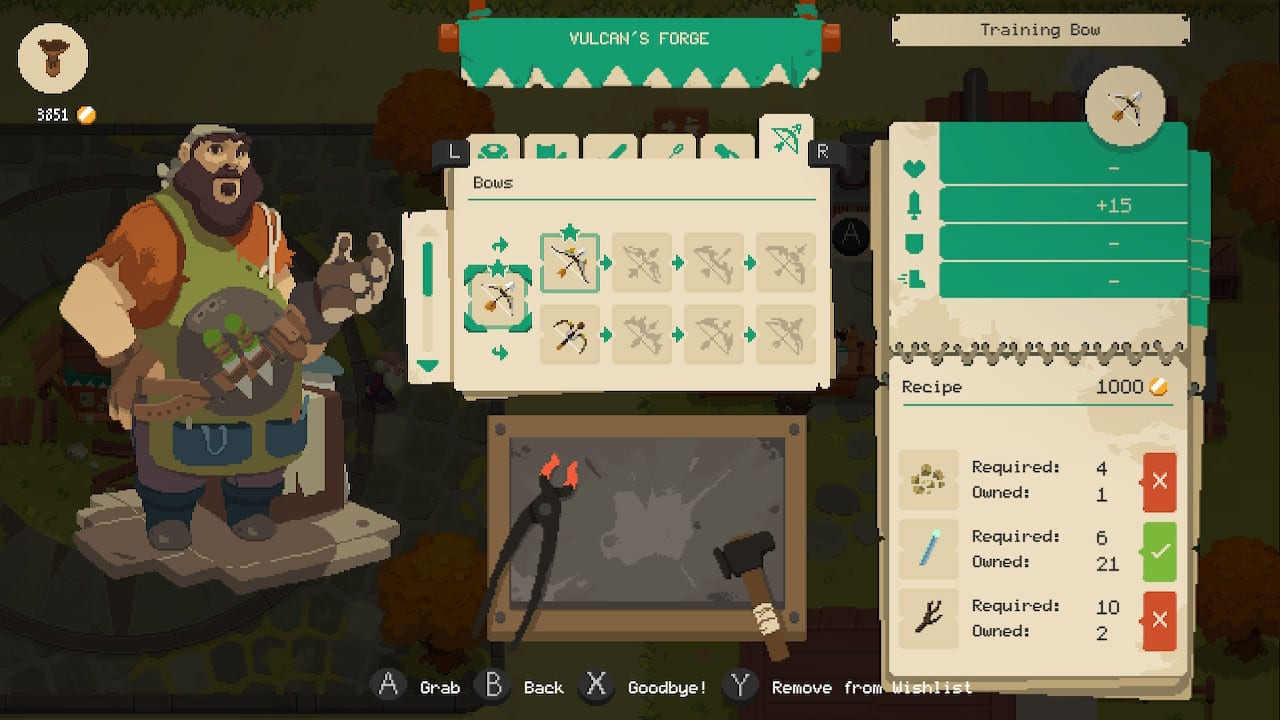 Learning to price items is probably the most daunting part of Moonlighter in the early stages, as you’ll really have no clue how to do it. Again, the game doesn’t really give you much help. Your merchant’s notebook comes in really handy – every time you pick up an item for the first time it will be added to your merchant’s notebook, and this will help you to judge its value. If you look at the top of each page in your merchant’s notebook there will be a maximum price, and the bottom of the page will display a minimum price. Each item will then be added to the notebook in order, with the highest value item at the top and the lowest at the bottom (you can change this so that it’s the other way around), so if it’s near the top of the page you know it has a high value and if it’s near the bottom you know it has a low value. As your book begins to fill out you can use other items to determine the price of new items – for example, if you get a new item and it’s above an item in your notebook that you already know is worth 200g but below an item that you know is worth 220g then you know that the new items perfect price is somewhere between the two. While using your notebook will give you a general idea of how much an item should be sold for, the only way to truly find out is by trial and error, namely putting the item up for sale at the price that you think it’s worth and seeing how people react (you want the smiley face, but not the one with gold coins for eyes – this means you’ve under-priced it). It’s pretty obvious, but when you’re trying to determine the price of a new item only sell one of them at a time rather than a stack so that you don’t lose too much money if you’ve under-priced something. 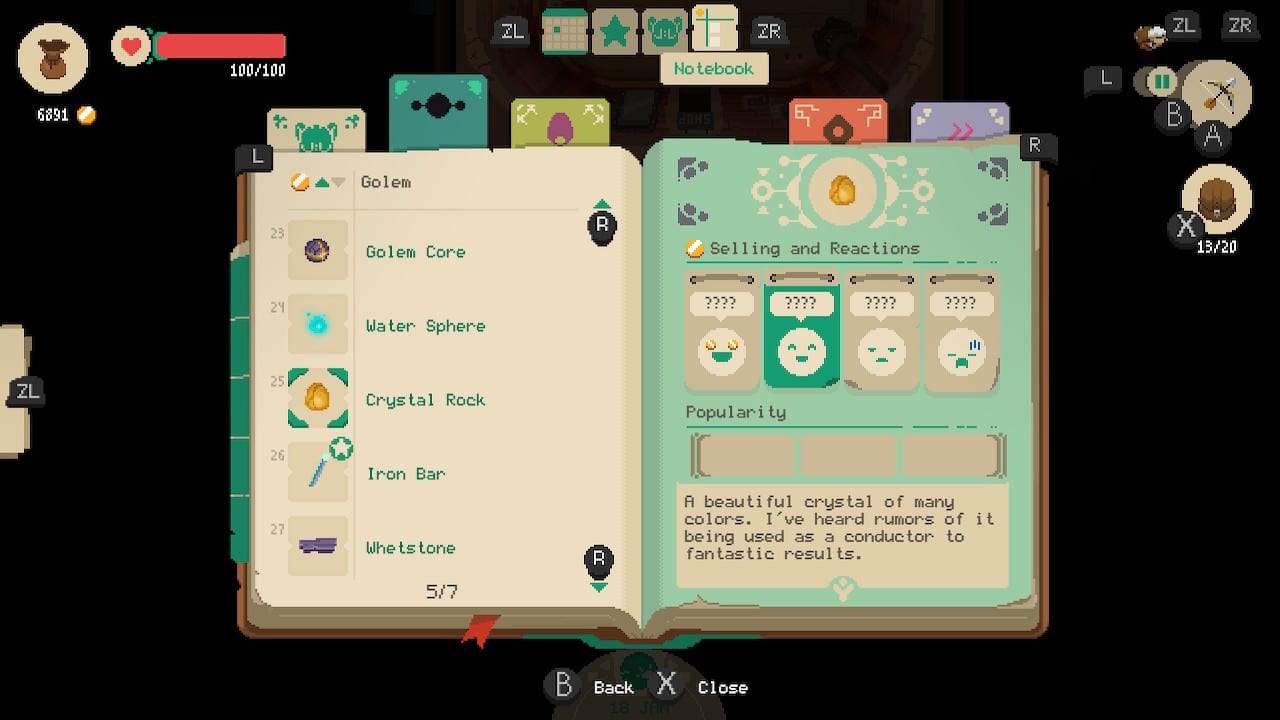 Use your Merchant Mirror for low value items 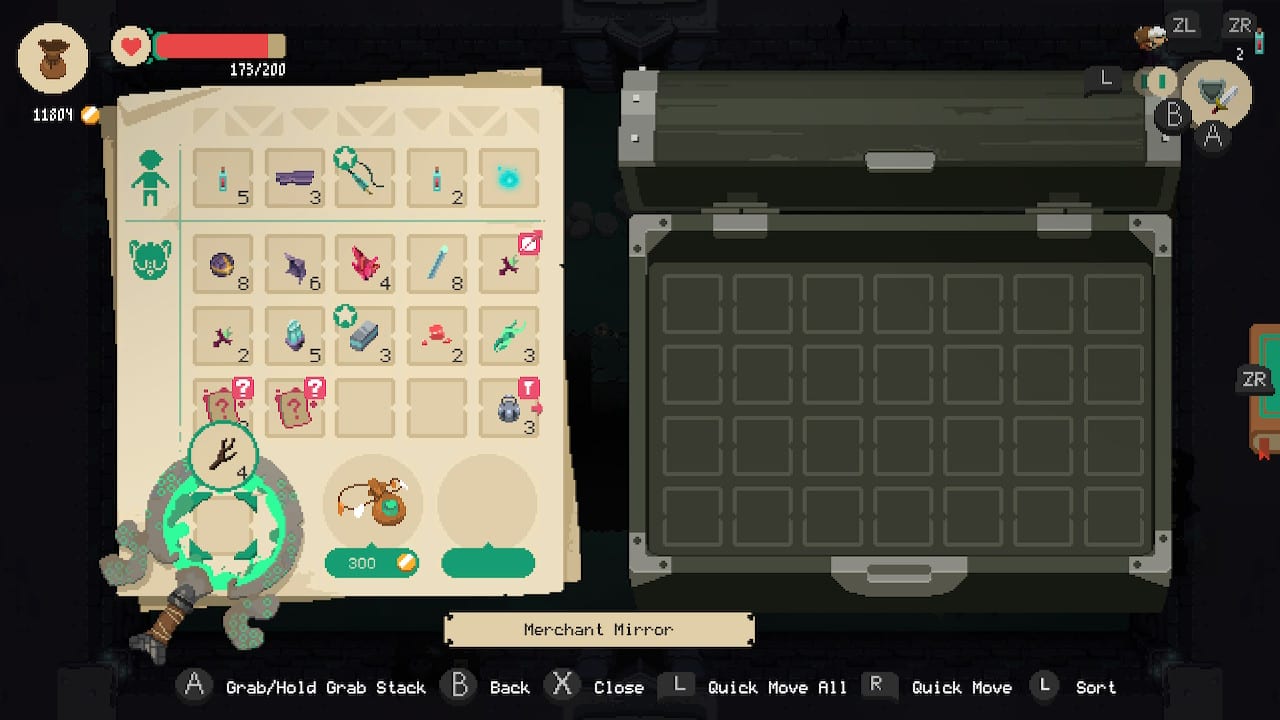 And that’s it for my Moonlighter Beginner Tips & Tricks. There is a lot more to this game than the tips listed above, but these should help to get you well on your way to becoming a shopkeeper and dungeon crawling extraordinaire. Disagree with one of these tips or think there’s something I’ve missed? Let me know in the comments below.