Two Point Hospital was one of my favourite PC games this year; the nostalgia hit hard as soon as I booted up the game for the first time, but there were a few annoyances with the game that stopped me giving Two Point Hospital an even better review than I did, and two of those annoyances have been addressed in recent updates.

The first issue I had with the game was the lack of a Sandbox mode, which—as the title suggests—is on its way to the game. This mode will allow you to build a hospital as you normally do, but you will also have extra controls, such as controlling patient flow, how much cash you have in the bank and what is unlocked. It’s basically a god mode. The trailer for this new mode is below:

Another issue I had with the game was that building rooms could become repetitive, especially the rooms that you needed more than one of in the same hospital. When you build a room, you generally build it the same almost every time, so having to re-build a GP’s office 6 times or so was a real pain in the arse. Thankfully, a recent update has added the ability to copy and paste rooms!

As well as the two features above, they’ve also added some Halloween decorations to the game, as if all of the ghosts I have in my hospital wasn’t enough of a scare for the patients. When I have had a chance to give these new features a try, I may revisit my review and amend the score appropriately, that is when I have finished playing Red Dead Redemption 2…

Let’s hope that these updates and additions continue to build upon what was already a great game. It would also be great to see Two Point Studios take on some of the other Bullfrog classics such as Dungeon Keeper; I would love to see that game get remade in a fashion that was true to the original (not like these wannabe games that have come and gone).

You can get Two Point Hospital for just £8.49 until Friday 1st November 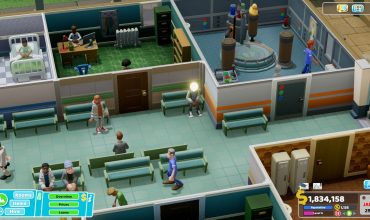