After almost a decade working on Prison Architect, Introversion Software has sold the rights to the game to city-building heavyweights Paradox Interactive.

Paradox has brought us games such as Surviving Mars, Cities Skylines and Stellaris, so they’re well versed in creating ‘good’ simulation and strategy games. I personally love Prison Architect and have sunk many hours into it—as I have Cities Skylines, which is arguably the best city building game ever created—so I’m eager to see what Paradox can do to further improve on Prison Architect, I just hope their ‘improvements’ aren’t just adding a bunch of paid-for DLC to the game. Having said that, Paradox CEO Ebba Ljungerud’s words below are reassuring:

“I believe the considerable player base of Prison Architect will be excited to see where we can take the game next,” said Ljungerud, “We promise to exercise good behaviour with this cherished title going forward.”

Prison Architect has a long history, originally launching all the way back in 2012 in early access and officially launching on PC in 2015. The game has proved popular ever since early access and it had generated over $19 million in revenue before it was launched on console. Introversion has been providing outstanding support for the game, adding new features regularly for free – just last month the game received the much requested multiplayer update.

Introversion co-founder Mark Morris had this to say about the Paradox acquisition:

“We’ve been building and managing this building-and-management game for nearly a decade. I think we’ve taken Prison Architect just about as far as we can, and we’re all eager to see where a team like Paradox can take it next!”

The deal has already been done and from this moment forward Paradox are in control of Prison Architect on all platforms including PC, Xbox, PS4, Switch and mobile. This includes making updates to the game and customer support.

Introversion haven’t yet revealed their next project but they have said they are working on something new – we’ll let you know as soon as it’s revealed! 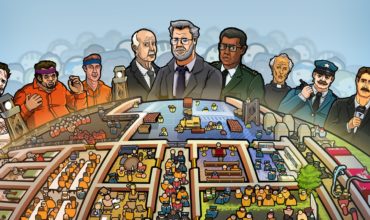