Fool’s Gold: Fool’s Gold is a new free roam event. During the event, players will compete for control of a golden armour set which Rockstar has described as “gaudy and protective”. You earn points in this event by taking out the person wearing the golden armour. Once you’ve taken them out it will be your turn to suit up, you’ll then earn points by killing all the fools not wearing medieval armour.

Competitive Fishing: Fishing is broken down into types, such as lake fishing, river fishing and swamp fishing. For each challenge you will be provided with all of the necessary equipment including rods, lures and bait. You win by catching the heaviest fish, and I should note that while in a fishing challenge you cannot be shot by other players.

Showdowns: In this game mode, players and teams are tasked with capturing and delivering bags, stealing loot from one another and, above all else, surviving. There are three different showdowns you can compete in, including Up in Smoke, Spoils of War, and Plunder. More details on the specifics of these modes will follow soon.

Target Races: Horse racing is also getting some work, with the addition of a new race type called ‘Target Races’. This race will see you shooting targets from horseback in order to pass checkpoints – as with any race, the first to cross the line wins.

As mentioned above, there are also new weapons coming to Red Dead Online. These weapons include a new rare double-barrelled Shotgun and the Evans Repeater, both of which can be purchased from the Wheeler & Rawson Catalogue or the local Gunsmiths. New clothing and customisation options are also coming, from the “snake adorned Diamondback Hat” and the “fur trimmed Rutledge Vest” to a boat-load of new emotes and more.

The all new double-barreled Shotgun

To round off and celebrate the latest update, Rockstar are offering players a 20% XP boost this week. The update is due to go live on Febuary 26th, with PS4 players getting access to some of the content—such as ‘Open Target Races’—early. 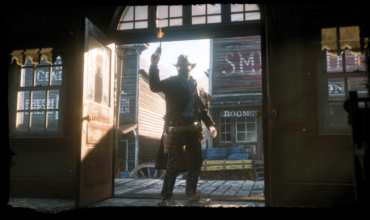 The next Red Dead Online update will target griefing again