There will be no main Assassin’s Creed game released this year, and that’s probably a good thing, as it may take you another 18 months to finish all of the content in Assassin’s Creed: Odyssey, which just keeps getting bigger, and bigger, and bigger. Ubisoft has released details of the games January updates and, to be honest, there’s so much of it that I don’t even know where to start, so I’ll just start by showing you this video:

First up we have the second episode of the paid-for The Legacy of the First Blade DLC. Episode 2: Shadow Heritage will be available from January 15th, and it will carry on the story arc from the first episode, Hunted. Detailing Episode 2, Ubisoft said:

“In the second installment you get to investigate a blockade initiated by the Order of the Ancients around the port city in Achaia. You’ll discover a group of stranded citizens whose lives are being threatened by a fierce naval commander, the Tempest, who is in charge of the blockade.

Steal the Tempest’s top secret weapon, help the citizens escape, and destroy the blockade once and for all…with your ship! An epic maritime battle awaits you at the Aegean Sea.”

To be able to start Episode 2, players will need to have completed the first episode, completed the Naxos questline in Chapter 7 of the main story, and be Level 28 or higher.

January will also introduce Aya from Assassin’s Creed Origins as a Ubisoft Club reward. The legendary assassins will join the ranks of your Adrestia as Legacy Lieutenant. Items wise, there’s a new Dionysos’ Character Pack which contains a gear set, mount, and a legendary dagger, and later in the month we’ll get the Athena Pack,  which will add gear that “really impresses a crowd”. Check out the picture below.

Freebie wise, January will also see the addition of two new questlines for The Lost Tales of Greece DLC which is free to all players. The first of the new questlines will be titled “Daughter of Lalaia”, and it will task players with travelling to a village to train the defenseless townspeople to prepare for incoming danger following the departure of all of the men who have left for battle. Ubisoft says that players will be confronted with choices that will determine the fate of the village. To start the questline players will need to travel to the Phokis Region after reaching Chapter 5 of the main story, and the recommended minimum level is Level 13.

The second new questline is titled “Poet’s Legacy”, which will become available later in the month. In Poet’s Legacy, players will meet “Greece’s most scandalous poet”, and you can expect to find that she isn’t quite what she seems as you “become increasingly involved in her risqué performances.” Ahem. To start this questline, players must travel to the Boetia region, once again after reaching Chapter 5 of the main story. The recommended minimum level for this questline is much higher than that of Daughter of Lalaia, as Ubisoft recommends players be at least Level 34.

Elsewhere in the update, players will see the introduction of the legendary Cyclops known as the Bright One, which players can take on for a chance to win his legendary weapon, the Hammer of Hephaistos. You’ll be able to find him on a volcanic island in the Angry Caldera of Arges, which you’ll be able to fast travel to thanks to the additional markers that were added in the 1.1.1 update. This new enemy has been designed as an endgame challenge for players, so Ubisoft are recommending a minimum level of Level 50 before you decide to try your luck. Be warned, take that recommended level seriously, he looks like a big bastard.

If all of that isn’t enough for you, two new tiers have been added to the Mercenary Ladder, which will rewards players with “new benefits worthy of a demigod” (seems a bit strong), and an all-new vendor is being added to the game, namely Hephaistos’s Workshop. He’ll be located in the Myson Cave in the Malis region, and he’ll provide the following services:

Upgrade – You can upgrade your gear to Engravings Tier 6 and 7.

Engrave – As you would expect from any blacksmith, you can also engrave gear at Hephaistos’s Workshop.

Finally, the update will also add a much community-requested feature, namely Level Scaling. Level Scaling will give players the opportunity to adapt enemy scaling settings to their own preferences through the options menu, affecting just how drastically the enemies scale to your level. The available options are as follows:

Ubisoft has noted that this option won’t be available in Nightmare Mode, as they want to maintain that mode’s challenging nature. This new Level-Scaling feature will be added as soon as the January update goes live on January 10th. You can read the full details of the update here.

Ubisoft is doing a fantastic job of keeping Assassin’s Creed: Odyssey absolutely brimming with content, especially considering it was already jam-packed with things to do at release. 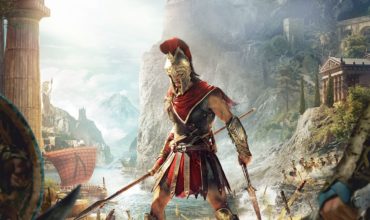