Rockstar has announced the next set of features that will be added to the Red Dead Online Beta in the games next update on Tuesday 26th February, and it includes various features designed to stop people being annoying, troublesome bastards.

The first of these new features are changes to the way player blips will appear on the games map. The visibility of player blips over long distances is being reduced, so players now won’t be able to spot you on the map unless you are within 150 meters of them, unless you’re “slightly further away” and firing your weapon. Rockstar is hoping that this change will prevent players from being “repeatedly targeted across the map” by people who are just out to ruin other players experience. If you’re an “overly aggressive player”, or “a complete bastard” as I prefer to call you, then your blip is getting the opposite effect, as your map position (and the position of your Posse members) will become more visible to other players with a progressively darkening dot that shifts from blue to red, which should make your play style easier to read and you easier to avoid. Your visibility will increase as you commit bad deeds like attacking other players or their horses outside of a structured mode, Free Roam Mission, event, or competition. Changing your ways and cleaning up your act will see your visibility fade over time.

Players who are consistently committing criminal activities will also be getting a tougher time following the update, as players who build up a high bounty will be hunted down by NPC Bounty Hunters that are wanting to kill you and claim the reward. Different crimes will incur different bounties, with acts such as killing other players landing you a higher bounty than assaulting townsfolk, while things like looting and ransacking will only decrease your honor rather than having any bounty ramifications.

The update will also add both Posse-wide Parleys, which will allow you to initiate Parley that applies to your attacker’s entire Posse after they kill you just once, and Feuds, which allow players that are confronting each other to initiate either a Posse Feud or Leader Feud after one kill, which turn disputes into a timed mini-deathmatch for players to settle their differences.

Daily Challenges are also coming in the update, and players can complete them to earn Gold Nuggets and XP. These Challenges will cover all aspects of life in Red Dead Online, including foraging for herbs, selling items at a Fence, hunting and skinning animals, clearing hideouts, and more. Rockstar says that these Daily Challenges will “expand and evolve over time” bringing specialty challenges and rewards.

Elsewhere in the update, Rockstar are implementing balance changes to several weapons—including changes to the accuracy of the Varmint Rifle—and voice chat is being reduced to work at closer proximity. There will be even more in the update, including numerous bug fixes, and Rockstar promises to offer more information on the update next week.

You can read all of the available information on the update here.

Red Dead Redemption 2 will be arriving on Steam next week 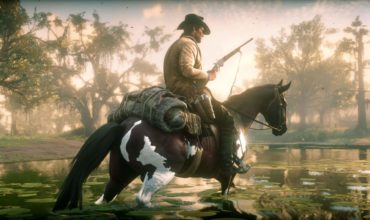