The new trailer for the upcoming Call of Duty: Black Ops 4 beta has given us our first glimpse of the new battle-royale mode—Blackout—and confirmed that the beta for that mode will release some time in September.

The trailer focuses mainly on the standard multiplayer beta, showing snippets of the multiplayer for the majority of it and informing us that the beta will take place across six maps, with six modes available and ten different specialists to play as. After all of this though, we get a brief glimpse of Blackout—Call of Duty’s jump-on-the-bandwagon battle royale mode—which appeared to show two groups of four players battling it out in helicopters and on quad bikes. The trailer confirmed that a beta for this mode will be coming in September, completely separate from the standard multiplayer beta.

The standard multiplayer beta kicks off this weekend exclusively on PS4 from August 3rd onwards before becoming available on PC and Xbox One on August 10th, to take part players will have to pre order a copy of the game.

Call of Duty: Black Ops 4 launches on PS4, Xbox One and PC on October 12th. 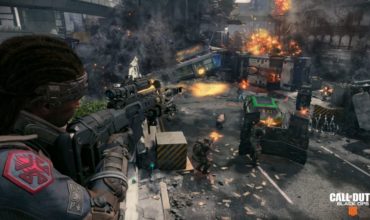